Why spend so much time preparing for married life?

Many people spend years in school pursuing a degree, which leads to a job, to earning money and to becoming an active contributor to society.  In that process, we spend endless hours studying, writing papers, and attending lectures, all of which is necessary in achieving our educational goals, enabling us to be well-equipped for whatever occupation we choose in life.

When young men feel called to the priesthood, they will go through formation and education for six years before they can be ordained. This length of time is crucial to preparing a person, not only to understand what they are receiving in the sacraments, but, most importantly, to help them realize what it means to “live” the sacramental life of grace.

This brings us to the Sacrament of Matrimony.  What, in the way of formation, is required to receive this sacrament?  In short, it all depends on what diocese or parish you belong to.  While some dioceses or parishes require weekend retreats, in-person sessions throughout the week or an online class, sadly, many parishes and dioceses have settled for a 6-8 hour Saturday session or a one day online preparation course.  ONE DAY? What can possibly be achieved in one day for a couple preparing to spend the rest of their lives together living out the Sacrament of Matrimony?

A couple’s spiritual, emotional and psychological formation happens gradually, over an extended period of dating and getting to know one another. This allows the couple to discover, on a deeper level, what they love about each other.  If their love grows and becomes fruitful, it will lead them to forge a unitive bond, which will be sealed and strengthened by God in the Sacrament of Matrimony.

To prepare a couple for marriage in the Catholic Church, it requires more than just preparing them for the wedding day; it means helping them prepare for the rest of their lives, until parted in death.  Children, teenagers and priests in formation spend 2-6 years in spiritual formation to receive the Sacraments of Confession, Holy Communion, Confirmation and Holy Orders. It makes sense, then, that engaged couples spend a considerable amount of quality time preparing to receive the Sacrament of Matrimony in the Catholic Church.

An engaged couple must eventually ask itself just how much time and effort it is willing to invest to ensure a happy, healthy, holy and lasting marriage?  How much time and effort are you willing to invest?  One in Christ is a tremendous resource that will help you come to a deeper understanding of how marriage is a participation in the life of heaven and what that means for your life together here on earth. Here are what some couples said after completing the seminar:

“Being together for as long as we have, it can be easy to put our relationship on autopilot. But as we prepare for a Catholic marriage and reflect upon its properties, we realize that a relationship takes work and requires the upmost attention. Our decision to love one another is one that we must make each day. We recognize that our marriage should be the primary relationship in our lives and trust that by keeping Christ at the heart, he will give us the grace we need to complete its lifelong commitments.” 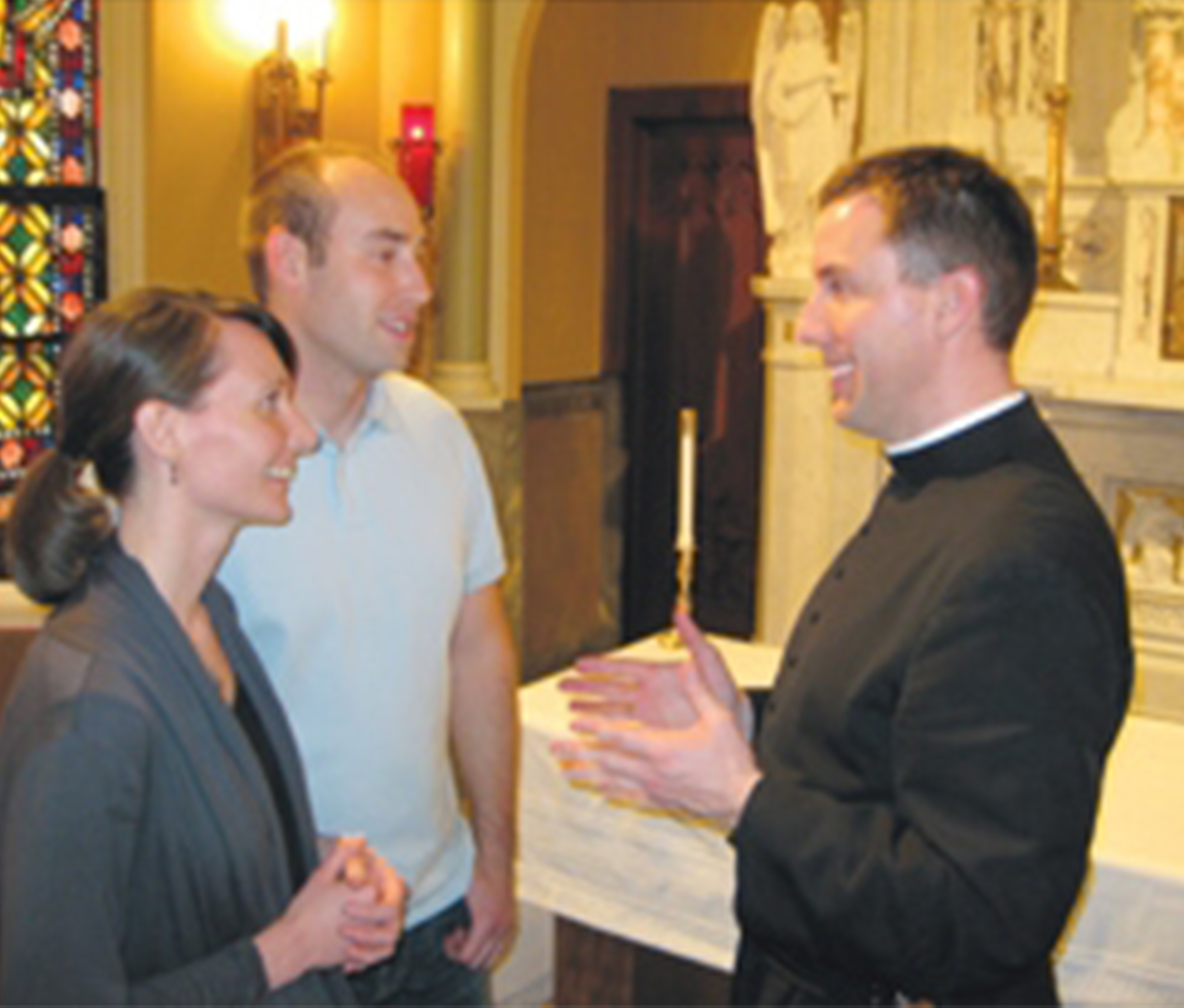 “The readings and videos of One in Christ have been extremely thought-provoking, illuminating, and rewarding for us. We’ve learned so much about what marriage is and what it means in the eyes of the Church and of God. All of the material has provoked many new conversations on topics we hadn’t even thought about prior to our preparations, and overall, it’s given us a deeper understanding and appreciation of what we’ll be partaking in in just a few short months. It’s also very much deepened our faith, both as a unit and in our own personal relationships with God. It’s also strengthened the bond we feel together with Christ as the unifying person.”

What is the One in Christ Marriage Seminar?

The One in Christ Home-Study Marriage Seminar is designed as a highly interactive and comprehensive marriage preparation program, so that couples will grow in their love for each other and in their knowledge of the Sacrament of Matrimony through catechesis, discussion, and prayer.

An overwhelmingly positive response has come from all the couples, 25,000 couples nationwide to date, who have participated in the One in Christ Marriage Seminar. They can’t believe how much they have learned together. Many of them have said that their communication and Faith have improved greatly, especially relative to many topics they would not have discussed were it not for the seminar.

Read this powerful testimonial from a couple who recently completed the seminar:

Since starting the One in Christ Marriage Seminar, it feels like we have a different relationship from the one that we started with. Having to grapple with uncomfortable truths about ourselves has led us to rework the foundations of the house we hope to build together. We have discovered that we are much less mature than we thought and that unfortunately, a lot of our relationship was based on mutually beneficial selfishness. In the past few months we have come to understand how empty and backwards it is to think of our individual strengths as the backbone of our relationship. In reality our relationship is fundamental to our strength and spiritual growth.

Listening to the stories and insights from mature, deeply faithful couples, we began to see the difference between where we were and where we wanted to be. It was shocking to see the realms of intimacy that we were lacking. For the most part, we had been cruising along at the level of feelings. We could express our feelings well and could express the sort of things that resulted in good feelings. Every once in a while, in the pique of a difficult situation, we would express our fears. Only through seriously considering the sacramentality of marriage, and the fear that it provoked in us, did it become clear to us what a “need” even is. A selfish relationship is completely foreclosed to the realm of needs since the self is ultimately responsible for fulfilling those needs. It is only through abandoning oneself to another person that discussing needs become possible. We have only just begun to understand these spiritual and emotional dimensions, but the mere glimpse that we have been given has been a gift from God and has affected our relationship profoundly.

We discovered that there was so much that we were withholding from one another. When we discussed our goals, or planned for our future, there were so many expectations that we never put the effort into communicating. There was no need to think any farther than pulling the emergency-break. Yet, the more sincere we were with our expectations, the more we understood how insufficient it is to base our relationship on a hodgepodge of shifting mutual interests. Once we conclusively agreed that the common purpose of our marriage was to be found in Christ, the nature of our disagreements changed. We stopped caring about who spent more effort doing what or trying to perfectly balance the amount of time that we spent on chores. Instead, we expressed what we needed from the other person, and simply tried to attain that. We stopped trying to measure up to each other and learned to discern what was necessary to be happy in the present moment. Our small disagreements and failures, even the most persistent, became inconsequential. More than anything else, we know that our actual needs are ultimately fulfilled by God, and that our marriage was part of that.

All of this has served to bring clarity and focus to the things we truly cared about before embarking on this journey. We had loose ideas regarding the divinity of sexuality, family and self-improvement but had trouble putting them into practice. We knew that modern concepts of sex and procreation were a disintegration of something much more wholistic available to the ancients. We knew that family was sacred but did not know how to maintain that sanctity. We knew that we wanted to improve but could not discern that from aesthetics. We found ourselves running away from the fallenness of common culture, rather than running towards the embrace of Christ. What we’ve found is that the more time we spend praying together and discussing liturgy, the more all these things seem to fall into place.

By no means has this made our relationship any easier. If anything, it has heightened the stakes of what we are doing. Yet, the burden is light compared to what we stand to gain. Our marriage is so much more sacred than we could have imagined. What we have been given is a tremendous sense of purpose that we are profoundly thankful for. God has so much more planned for our marriage, rather than our individual lives. The more we give ourselves over to one another, the more goodness that we see come to fruition.

How does the marriage seminar work?

Once you register, Fr. Thomas will send you a confirmation email on how to get started. Couples are asked to read from the One in Christ manual, which is deeply theological, spiritual, and historical, and then view several videos from the Dynamic Catholic video series, Better Together. This series contains a lot of practical advice and spiritual support from several couples on a variety of topics; both the manual and videos complement each other quite well.

After thoughtful, challenging, and fruitful discussions, couples are asked to submit written reflections on what they gleaned from the material. These discussions are designed to foster open communication and to understand, on a deeper level, the Sacrament of Matrimony in the Catholic Church. Couples have found this to be extremely rewarding for their future marriage.

Once the couple completes and submits their personal reflections, Fr. Thomas, author of One in Christ, works with each couple individually via email to guide, support and encourage them with personal feedback and advice.

What is included in the fee?

As part of the well-spent fee, each couple will receive the following:

Fr. Thomas provides several opportunities for couples to win a “date night” out.

We pay for the material and first follow-up session with Lisa.

With that said, I hope and pray that the home-study seminar will be an enriching experience for you and that you will come to a greater understanding and knowledge of the Sacrament of Matrimony in the Catholic Church.

One In Christ
Marriage Preparation Seminar